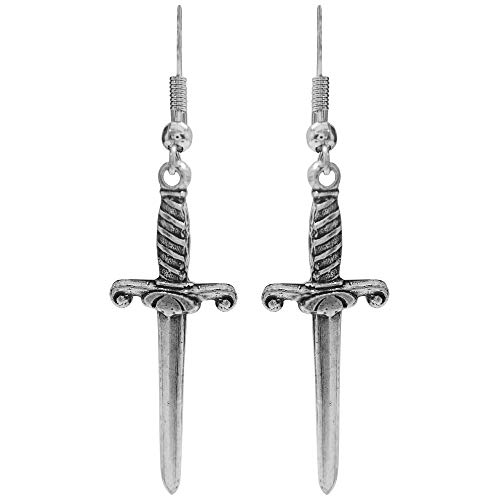 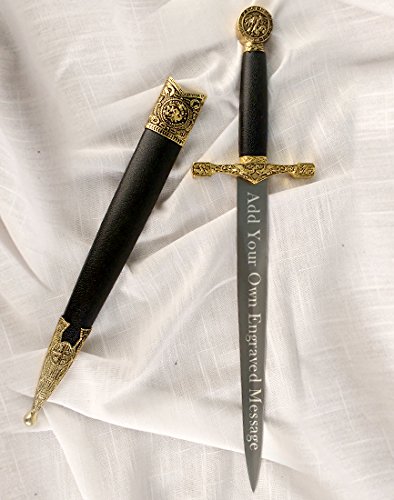 Excalibur was the shimmering blade given to King Arthur by the Lady of the Lake (who I hear was clad in shimmering samite). And thought Excalibur wasn't engraved, Arthur was a king and his sigil emblazoned on everything else he owned. You're not a king, so why not add a touch of free engraving to make this Excalibur truly yours? This beautiful dagger bears the dragon of the Pendragon family on its elaborately carved pommel. It also features Arthur's name, and the word "Excalibur" in a circle around the dragon. The overall length of this dagger is 14.5 inches with a 9-inch, un-sharpened stainless blade. The dagger comes with a sheath that bears throat and tip embellishments of ornately gilded metal. And, to truly make this dagger your own, you can add a custom engraved message on the blade, for free! That's right, simply add this dagger to your cart and you'll be whisked to Amazon's personalization utility, where you can etch one or two lines onto the blade (if you only use one line, we will center that one line on the blade for you). These are extremely popular groomsmen's gifts and wedding gifts. 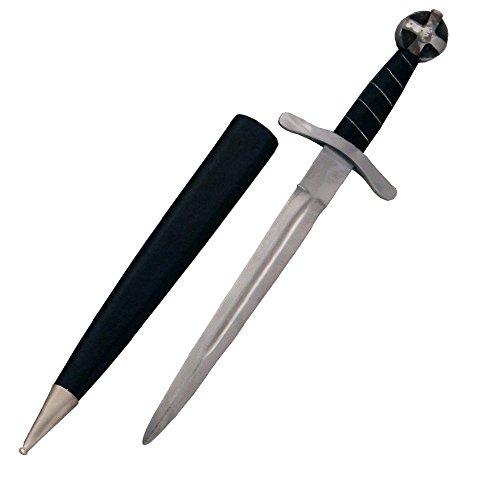 Medieval Cross Dagger Some daggers were made so that they could deliver a wicked cut when necessary, but this Medieval Cross Dagger has a shape that reminds us all that daggers were, first and foremost, a weapon designed for thrusting and stabbing before all else. This daggers blade is simple and straight to the point, being crafted from quality steel and possessing a straight-edged slant that tapers the blade until it gradually comes to a lethal-looking point. There is no muss and no fuss about it, which means that this dagger-blade is all business. The hilt is a bit more decorated, possessing a straight T-bar guard made from polished brass metal, as well as a leather-wrapped wood grip that is comfortable to the hand. The daggers wheel-pommel is adorned with a simple cross and nothing more, although its matched polished brass look enhances the weapons appeal greatly. Included with the dagger is a simple scabbard, constructed from wood and wrapped in leather, before being furnished with polished brass throat and chape pieces. This dagger has an overall length of approximately 20 inches. Simple and to the point, this Medieval Cross Dagger is a great little piece to add to a weapons collection, as well as a fun blade to wear at your side any time you leave the modern times and take... 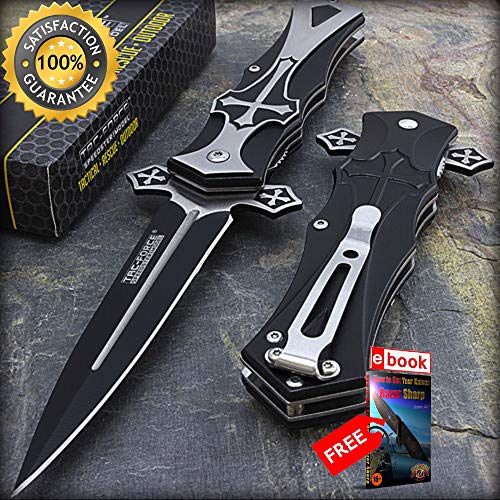 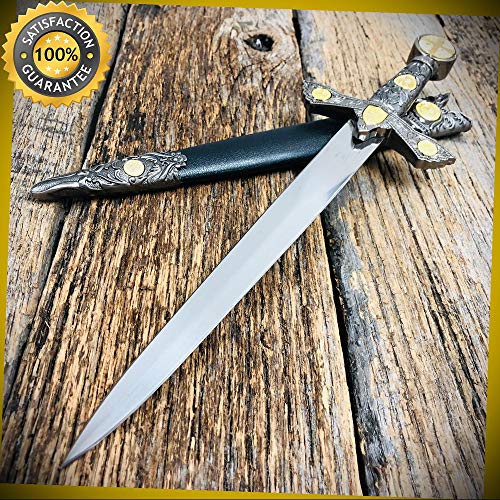 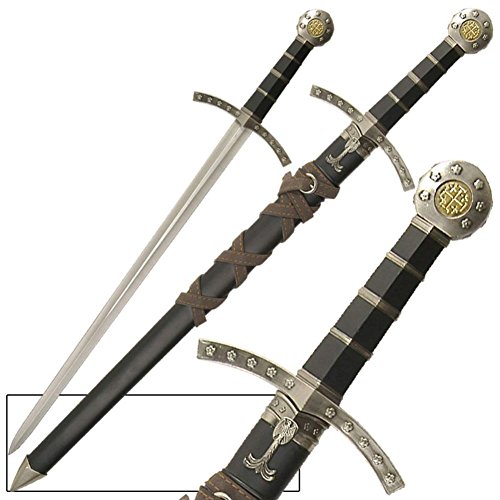 This is the Black Wooden Crusader Cross Short Sword/Dagger. The five crosses came to become the symbol of the Kingdom of Jerusalem. The four smaller crosses represent the four books of the Gospel. The five crosses together represent the five wounds inflicted on Christ during the Passion. The blade of the sword has been constructed from 440 Stainless Steel with a false edge and sharp point. A ridge runs down the center of the blade. The scabbard is ABS material with black ABS finish. The drag of the sword is polished steel. A leather cord has been wrapped around the scabbard. The scabbard throat is polished steel. The guard is 440 Stainless steel in an Oakshott type XVII. The handle is black ABS with five steel rings. The pommel of the sword is a disc design with the Crusader Cross in gold color. 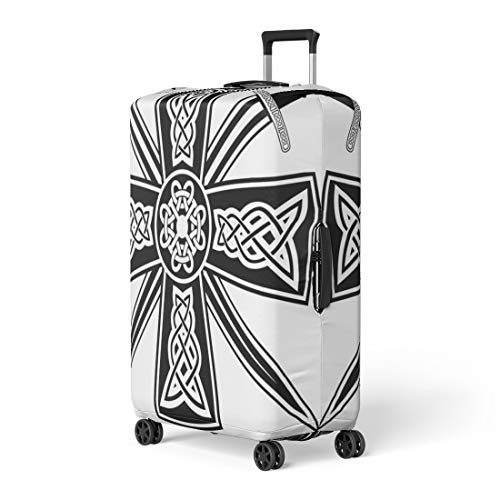 This New Model luggage cover is made of durable high quality material.Superior sublimation quality makes the pattern more vivid and the color brighter.Double-stitched all over, full of stretch and high elasticity, ensure your suitcase stays shut during the trip.Protect your suitcase against dirt and scratch; make your suitcase instantly recognizable.Durable and washable,Fit quickly and easily in seconds. 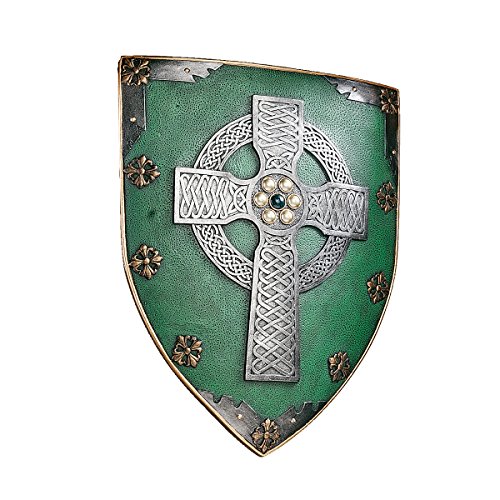 Emblazon your walls with the legendary shield of faith that Celtic warriors carried into battle! Our exclusive, medieval-style, nearly foot-and-a-half tall replica is cast in quality designer resin and hand-painted one piece at a time with an antiqued emerald green and faux metallic hue. 13"Wx2"Dx17"H. 3 lbs. 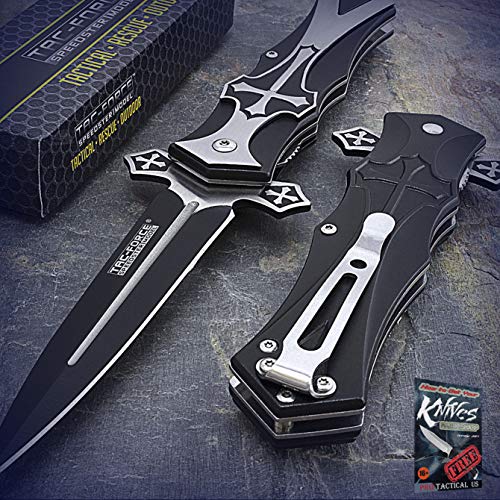 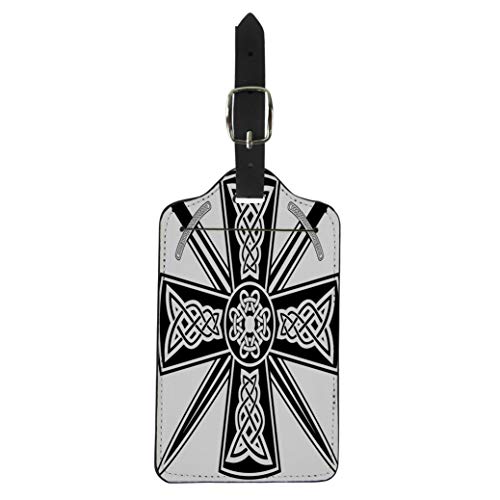 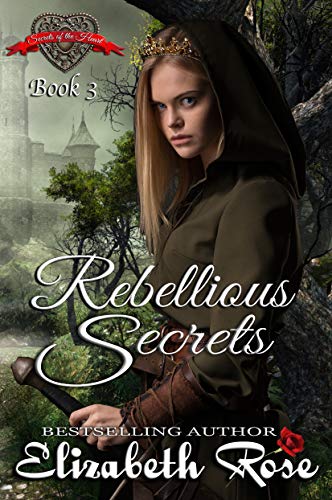 Book 3After being framed and stripped of his title, Sir Jacob Quincey vows revenge against the High Sheriff of Durham who ruined his life and stole his lover. With no family, title or lands to his name, Jacob takes to the forest to live as an outcast. But after five long years, he’s managed to assemble an army, teaching commoners how to fight. Now is the time for justice to be served but one lady stands in his way. Lady Maira Douglas, daughter of Rowen, one of the Legendary Bastards of the Crown, resents that her father has betrothed her to the High Sheriff of Durham. The last thing she wants is to marry a man who will make her act like a lady and force her to put down her blade. But when Maira takes a liking to the man's young son, she decides she will do anything to protect the child.One day in the forest she meets Jacob Quincey and experiences feelings for this man like never before. He is a rebel but can give her what she’s always wanted. But to gain one thing, she must lose another that is very dear to her heart. When a shocking secret is revealed, it can change both of their lives. But will it bring them together in passion or tear them apart? 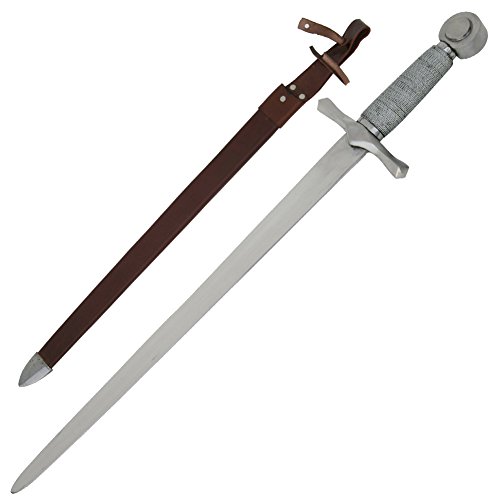 This 16.5 inch blade is made of EN-45 Carbon Steel with a strong central ridge and a hardness of 50-55making it great for fencing practice. 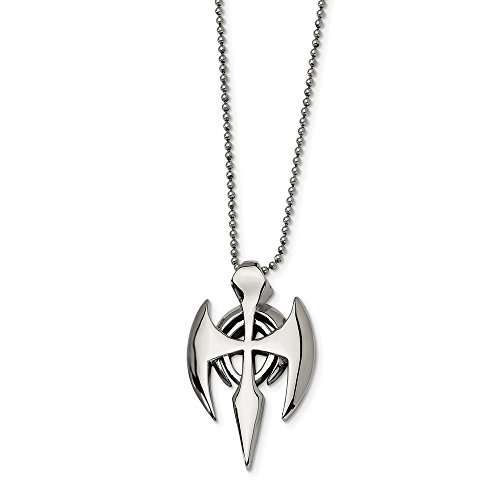 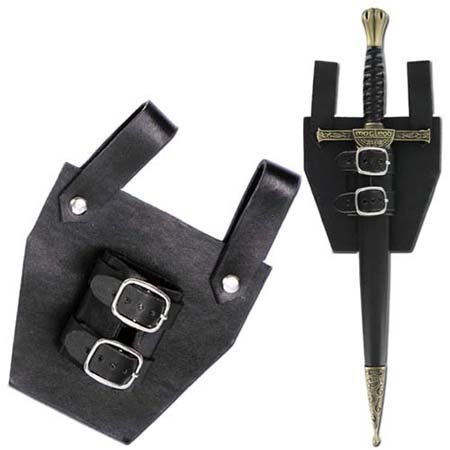 This is a leather buckled Medieval frog for carrying a dagger or axe. Measures 6 inchx 4 1/4 inch overall. 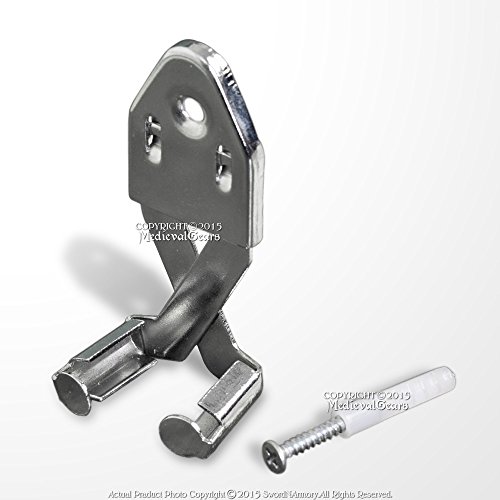 This is the Stainless Steel Sword Hook Wall Hanger. This is an extremely compact and efficient way to hang your swords up on the wall or on an empty plaque. This item includes a screw and a plastic anchor and can be screwed using a simple phillips head screw driver. This sword hook can hold swords up to 2.5 inches wide and should rest with the guard against the hooks with the blade pointing tip down. 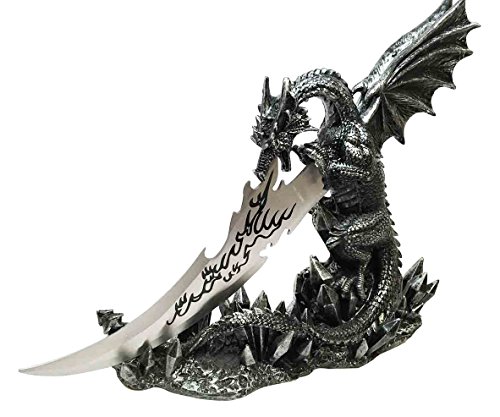 This Fantasy Dragon Letter Opener measures: HEIGHT 9.5" WIDTH 3.25" LENGTH 13.75" (knife portion) 11.5" Overall. Decorative Knife Blade is made of carbon steel. (knife is blunt) This Fantasy Dragon Letter Opener is Made of cold cast resin, hand painted and polished. This menacing dragon is the guardian of the crystal cavern. His breath of fire is so hot that many compared it to a hot blade slicing through an object and melting it as it touches the surface. This letter opener is awesome in design with the base of the letter opener and the dragon dagger coming together as whole unit. 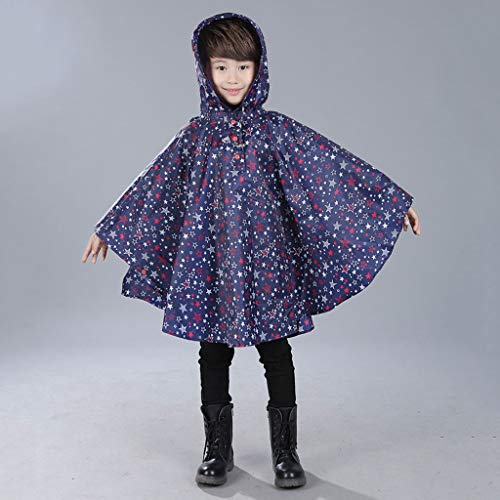 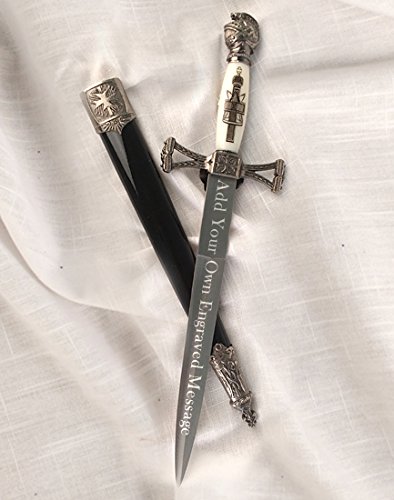 The Templars were the "special forces" of the medieval world. They were feared and revered (and, eventually, smeared, but that's another story). This Templar dagger recalls the knights of old, and the new Templar order popular today. Add your own personal mark to the illustrious history of this knighthood with a free custom engraving of your choice. This stylish dagger is slightly smaller than our other daggers in this price range, but it's beauty is unmatched. A white grip is etched with the Symbol of the Templars. The metal pommel is carved to look like a beautiful armet helm, and the guards are flared into the semblance of Templar crosses. The overall length is 12inches with a 8-inch, un-sharpened stainless blade. The dagger comes with a sheath that bears throat and tip embellishments of gilded metal. And to truly make this dagger your own, you can add a personalized engraved message on the blade, for free! That's right, simply add this dagger to your cart and you'll be whisked to Amazon's personalization utility, where you can etch one or two lines onto the blade (if you only use one line, we will center that one line on the blade for you). These are extremely popular groomsmen's gifts and wedding gifts. Also great for knighting ceremonies and zombie apocalypses. 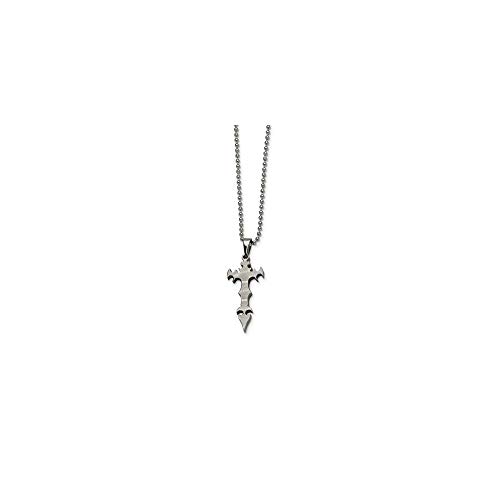 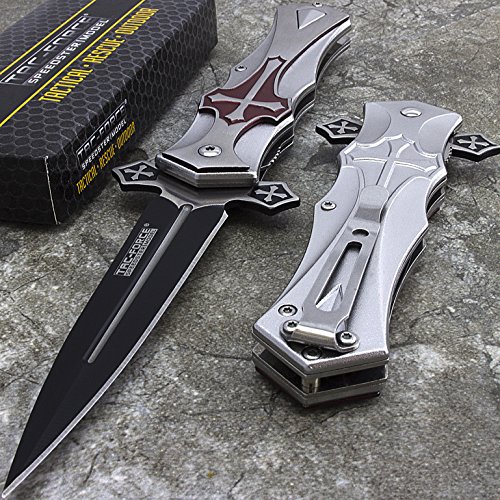 With its detailed design and superior structure, the Celtic Cross LARP Dagger is great for close combat while LARPing. This Calimacil LARP weapon is made of ultra light, ultra durable foam that's latex free and ready for your next LARP battle. Watch this video to see every detail. Celtic Cross L...

The Jerusalem Dagger by Art Gladius gets its namesake from the Jerusalem cross upon its octagon pommel. This decorative dagger has a blade made of stainless steel, making it great for collection and display, and its scabbard is included. Jerusalem Dagger with Scabbard: https://www.medievalcolle...

How to make a Medieval Rondel Dagger: Forging a Renaissance Knife from Scrap metal: Manning Imperial

How to make a Medieval Rondel Dagger - Forging a Renaissance Knife from Scrap metal at Manning Imperial 🙏Thanks for Supporting the channel: https://www.youtube.com/c/Drawbridgeprops_and_armoury?sub_confirmation=1 ⚔️DRAWBRIDGE PROPS & ARMOURY 🙏 BECOME A PATREON: https://www.patreon.com/drawbrid...

http://www.todsstuff.co.uk/ Looking at another one of Tod's rondel dagger replicas and talking a bit about how earlier rondel daggers differed from many later ones.